Here are the six most common thing to connect to a HDTV. This step by step will give you a good idea on what you will need to connect your new TV.

1. Connect an Old VCR with no Tuner

Yes, many folks still want to connect their old VCR to the new HDTV. Connecting

your VCR to your new HDTV isn’t all that hard. Just locate the round yellow video connector or RCA Jack, then look for the audio jacks which are colored red and white, below. Here’s the tricky bit, on most modern HDTV’s the yellow jack isn’t

there. Manufacturers merged the Composite (yellow) connector and the Component Y (green) connector, Figure 2. See how it’s green? Some manufacturers paint a yellow ring around it some do not. Either way the jacks should be labeled “Component/AV In”. Once connected, you just change the TV input to A/V, Composite or Video which ever word your TV uses.

2. Connect My Computer or Laptop

Connecting a laptop or a computer is also fairly easy. Every PC or Laptop made

before about 2010 or so has a VGA connector. With a few exceptions, HDTV’s are also equipped with one. You can buy various length VGA Cables pretty much anywhere they sell computers. If you have an Apple Computer here is how you connect it. You set the input on your TV to VGA or Computer.

Over the last two years more and more home computers are coming equipped with HD connectors. At first manufacturers were using DVI connectors but those are getting pushed aside and HDMI connectors are just as common as DVI. Modern day laptops only use HDMI.

The recommended way to connect a cable/satellite box to your HDTV is with an HDMI cable. If your box doesn’t have a HDMI port, take it back to the cable office

and get a new box that does. You could use the old Component Video cables that some companies provide, but the Component cables are so bulky. Compare for yourself.

4. Connect to the Internet

I don’t have a SmartTV

In order to connect your non-SmartTV to the Internet you’ll need to have a Smart Device. What is a Smart Device? A Smart Device could be any device with the ability to access the Internet for Content. Here is the Wiki explanation, it goes into the subject a little more.  Here are some models of Smart Devices from Samsung, Panasonic, Sony and Apple.
So what devices are Smart? Blu-Ray DVD or Surround Sound systems and streaming media boxes such as Roku, Apple TV, etc. It’s best to buy a device that has Wi-Fi built in, it just makes it easier to set up and fewer wires. See below on how to connect your smart device to the Internet.

I do have a SmartTV

Connecting a SmartTV to the Internet can be done in two ways. Using a direct connect cable such as Cat5 or at5e or using Wi-Fi.

In order to use a Cat5 wire to connect your Smart TV you’ll have to have the cable modem relatively close by. Technically Cat5/5e/6 Ethernet cables can be as long as 300 feet. But unless you’re able to fish the wire in the walls and ceiling or your modem isn’t close to your TV then you’ll have to use Wi-Fi.

Setting up Wi-Fi varies between Manufacturers. Most Manufacturers have included WPS into their Wi-Fi setup.  WPS, which stands for Wi-Fi Protected Setup, allows easy setup of Wi-Fi devices in the home. Weather you are performing a fresh setup or finally adding Wi-Fi  all you do it select WPS from the TV menu,

press the WPS button on the Wi-Fi access point and wait for the two devices to chat a bit and establish a connection. After a bit you’ll be notified the connection has been established and you’re done.

5. Connect to a Sound System

There are many ways to connect your Sound System to your TV. Here I’m going to just talk about, in my opinion, the two most popular way to connect the devices.

Optical Audio or Toslink is, in my opinion, the preferred way to connect a basic Sound System or Sound Bar to a 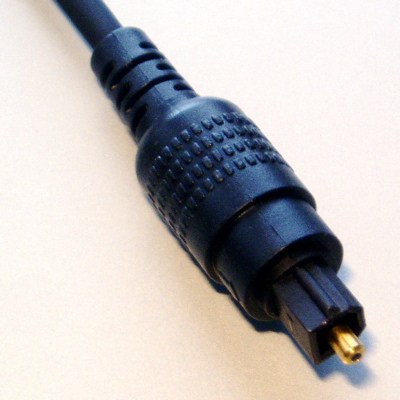 Installation is simple, the jack had a flat side that when rotated you slide in when aligned.  One bit of caution here, cables are shipped with a  small rubber cap on the tip.  I have spoken to many people who had problems getting their sound system to work only to find they hadn’t removed the cap.

HDMI via the ARC

With the introduction of HDMI 1.4 came the ARC or Audio Return Channel.  They used two pairs of wires in the regular HDMI cable that wasn’t being used.  Sound from the TV is sent to the audio device (in digital format) .  This makes for a very easy setup.  However, the HDMI port on the back of the SmartTV needs to indicate it is an ARC port otherwise nothing come out of your Sound System.  One quick note, I found that on the Samsung Soundbars you have to connect the HDMI coming from the TV to the OUTPUT HDMI port on the bar.  I haven’t checked to see if other vendors are doing this but Samsung certainly is.

Some say that the days of free over-the-air TV are coming to a close.  Certainly with the addition of HDTV over-the-air one could argue this point. When the government switched the broadcasters into Digital TV they did improve the picture quality but at the expense of signal distance.

Which antenna you  connect to your TV depends on where the TV station is located.  There really isn’t one antenna for all situations.  If you’re close then a set of rabbit ears will do the job, but if you’re further away or have something big in between you and the station you’ll have to look at other solutions.

As you can see it’s not all that complicated to set up your HDTV. Take it slow and connect and test as you go. Write down which port you’re using for each device. Many TV’s allow you to rename the ports from the setup menu.  Do that, it does help.

5 Ways to Improve Your Home Entertainment Viewing Experience
Programmable Remotes – Control ALL Your Technology!
2 Great Headphones For Your Home Theater