Your MacBook can get along great with your TV, as long as you make the right connections. All you need to know is whether your MacBook and TV have the same ports. Even if they don’t, the chances are very good that you can find a compatible adapter.

HDMI is not only fast, it carries both audio and video in a single cable. It’s the current standard for digital AV connections, so you can be sure of finding one or more HDMI ports on your TV. However, your MacBook may not be so lucky — only the most recent MacBook Pro is equipped with HDMI out of the box.

Apple is a champion of Intel’s fast and flexible Thunderbolt port, which can carry audio, video, and data on a single cable. Although it’s been adopted only in the past two years or so, you’ll find more MacBooks with Thunderbolt than HDMI. However, you won’t find a Thunderbolt port on your TV. 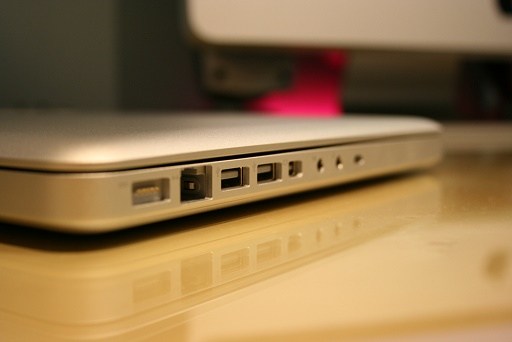 Apple developed the Mini DisplayPort (MDP) in 2008, and you can find one on virtually every MacBook until Thunderbolt began to replace them in 2011. Like Thunderbolt, MDP can do audio, video, and data (although not quite as fast). The bad news is that TV manufacturers haven’t been quite as eager to include them (or even full size DisplayPorts) on their HDTVs.

“Digital Video Interface” says it all — this was the first major digital video standard of the HD age, and is still quite commonly found on HDTVs. Until 2008, Apple included some form of DVI port on many of its MacBooks (typically the Mini-DVI, although the original MacBook Air used an even smaller Micro-DVI port). One potentially big drawback: DVI doesn’t handle audio.

The classic computer monitor port is surprisingly common on many HDTVs — but it’s also uncommon (actually, non-existent) on MacBooks. It’s also video-only, so you’ll need to arrange separate accommodations for your audio channels.

Dating back to the era of VCRs, you might expect S-Video to be a less-desirable connection than the cutting-edge digital ports on our list. But you can still get a solid video image with S-Video, and you can find them on many TVs and projectors — just don’t expect to find one on your MacBook.

The highest-quality analog connections split the video signal into separate “color channels,” often with each color getting its own discrete cable. Composite video inputs can be found on plenty of consumer and professional video equipment, but not on MacBooks.

Adapters to the Rescue!

Even if you can’t make a direct connection, you can find an adapter available from Apple or a third-party manufacturer to connect nearly any two of the ports above. Once you’ve determined which ports your TV and MacBook have to offer, it’s a simple matter of finding an adapter that works with what you have. DVI and Mini DisplayPorts are particularly flexible, and will even play well with older analog-only connections like S-Video and Composite Video. Thunderbolt Adaptors

Once you’ve made the physical connections, make sure that your MacBook is sending the right video to your TV. Go to the top left of your screen, select the Apple icon from the drop-down menu, and navigate to System Preferences → Hardware → Displays. In most cases, checking the “Mirror Displays” box will give you what you want, but you can also use the blue boxes on the screen to manually position the video image.

A common drawback of many ports listed is that they only carry video, not audio. Even HDMI is implemented differently by some manufacturers, so you’ll sometimes need to supplement an HDMI connection with an audio adapter. Unfortunately that means you won’t always get a single cable solution. Luckily, your MacBook and TV will also have audio ports that can give you sound – with an extra adapter, of course.

The standard “red for right, white for left” RCA connections can be found among the inputs of nearly every TV ever made. Just take a look on the back (or wherever your “Line In” ports are located).

Many HDTVs also have a digital audio input (with the arcane designation S/PDIF). This is ideal for those who don’t have an all-in-one HDMI or Thunderbolt connection but want higher-quality sound than RCA can provide.

The 3.5mm headphone jack on your MacBook sends out stereo audio, and you can easily find an adapter to connect it to the appropriate audio input jacks on your TV. There are plenty of 3.5mm-to-RCA adapters available, but it’s a lesser-known fact that you can adjust the audio output from your MacBook — even older ones — to send digital audio through the headphone jack (although you’ll need a “Toslink mini-plug adapter” to do so).

Author Bio: Dwayne Hogan is a tech writer for the USDish blog and he also manages their Dish Latino product line. Find him on Twitter @DwayneHogan.